When Geri Freedman took her two young grandchildren on a glass-bottom boat to see coral reefs off the Florida Keys, she expected a tour similar to what her own kids experienced 30 years ago. But instead of the vibrant reef teeming with life, she saw a devastated ecosystem, drained of color and life. She felt for the first time that her grandchildren were not going to inherit the same beautiful Earth she grew up in — unless she took action. 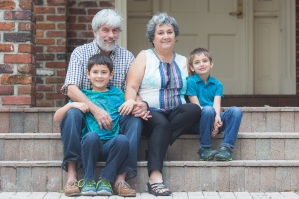 Geri Freedman was motivated to join Elders Climate Action to protect the planet for her grandsons Nathan and Noah, pictured here along with her and her husband Dave. Photo: Natalie Brand.

For Freedman, and 3,700 other elders — people age 55 or older — taking action against climate change is a top priority. They represent the growing membership of Elders Climate Action (ECA), a nonprofit advocacy organization working to mobilize their voices to push local, state, and federal governments, as well as businesses, to address climate change.

ECA started in 2014 as a project of the Conscious Elders Network, another organization capitalizing on the time, energy, and wisdom of older generations to address social issues. Both organizations belong to the fast-growing international network sometimes referred to as the gray-to-green movement. With more than 90 million elders just in the United States, the movement draws upon a large population of voters with concerns for the environment and their individual legacies, a potent motivator for influencing pro-environmental behaviors.

Freedman, now co-chair of the ECA Coordinating Council  Board, believes that while her generation spoke up in the past about social and environmental issues, they have been too complacent on the issue of climate change. “Our generation is a very huge contributor to the problems we face and some of the inaction,” Freedman related. ECA addresses this challenge by making sure elders’ voices are heard in the voting booth and that they hold politicians accountable.

They do this in part by asking elders to pledge to vote in every election and to consider the environment with each vote. Pledge makers and ECA members then receive information about upcoming elections and campaigns, such as lobbying Congress members to agree to work cooperatively on new climate change legislation.

Rather than supplant existing organizations, ECA works by filling the gaps in engaging elders in climate change and finding areas of synergy with other programs, according to Freedman. They collaborate closely with a variety of climate change organizations, including the US Climate Action Network, Citizens Climate Lobby, Mom’s Clean Air Force, and 350.org. In order to address issues of diversity and social justice related to the climate change movement, they also have partnered with the NAACP to identify strategies for engaging new populations.

Additionally, ECA encourages members to form regional groups to tackle issues meaningful to their local communities. The Massachusetts chapter, for example, has testified before their state legislature and participated in local protests. Understanding the potential power of localized action to promote change, they hope to increase the number of regional chapters this year from five to 20. 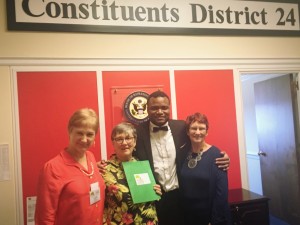 This summer, they also will hold their third annual meeting in Washington, D.C. to inform, inspire, and engage members from across the country. Along with presentations, networking, and strategic planning, they will head to the hill to engage directly with members of Congress. Last year, they delivered their climate change message to all 535 congressional members.

It’s difficult work sometimes but the group also makes it a point to have some fun. They have staged a flash mob at Union Station in D.C. for Grandparents Climate Action Day and developed their own chant inspired by recent social activism movements: “Tell me what elders look like, this is what elders look like!” In return for their hard work and dedication, members gain a community and a purpose, factors closely associated with good health and longevity.

And while many of ECA’s members have scientific backgrounds or environmental interests, in the end, it’s not about communicating the science of climate change but rather focusing on a livable planet for future generations. Their optimism for the future flows directly from their love for their children, and their children’s children — the type of love we all share.

By acting together and making their voices heard, they are transforming that love into the power necessary to protect the Earth and their legacy.

Special thanks to Geri Freedman for providing additional information and context for this post.

One thought on “Building a Green Legacy: Elders Climate Action”